Here’s a quick roundup of highlights from the world of SEO from last year’s final quarter to get you bang up to date heading into 2023.

Read on to get up to speed with the biggest stories and hottest topics in search right now.

The most popular stories from our Rich Snippets newsletter

Catch up on the ten most popular links we shared in our weekly Rich Snippets newsletter during Q4 2022:

1. Google as a dying mall

When Emily Velasco tweeted an exasperated comparison of Google to a dying shopping mall, she couldn’t have predicted the wave of 7K retweets and 55K likes. (RIP her mentions.)

Apparently Emily wasn’t alone in feeling like she couldn’t get what she came for from the search giant. Some responders retorted with “if you know the tricks, it still works.”

But here’s the problem as Emily sees it:

The thread is illuminating, funny, and a bit scary for SEOs. Emily quips:

“The Empty Web: SEO-Oriented Search Results as Online Liminal Spaces” seems like a fun thesis to write and read.

SEOs are no longer the ghosts in the machine. Regular users are aware that we exist. (Back in my day, no one knew what an SEO was…. rabble, rabble)

Roger Montti also wrote up a fantastic piece that breaks down why this tweet resonated.

You want to do some tech SEO so you grab a crawler, pop in a few URLs, and bam – results.

Nothing’s that simple, not even things that are simply awful.

No two crawlers are going to give you the same output. With larger sites and dynamic frameworks, we’re lucky if two consecutive crawls agree.

All we ever see of stars are their old photographs.

Web crawler accuracy has significant ramifications on data integrity, diagnostic accuracy, and a hard cost in the form of development time.

Because Giacomo Zecchini’s new article on validating session isolation needs to crush the incredible importance of technical nuance into you like a giant squid hitting Manhattan.

The article explains, diagrams, and even animates the concepts to prepare you for the showdown: 14 technical SEO crawlers vetted in a series of six pass/fail tests.

This article details it all like Rorschach’s journal at three minutes to midnight.

But the thing about fairy tales is that before their PR-sanitized version makes cinematic glory, they’re often served as cautionary tales.

Once upon a time, Timnit Gebru was a lead AI ethicist at Google. Then one day, after she criticized the use of AI in facial recognition by law enforcement during BLM protests, Gebru was told she had resigned.

Well, because AI is money, of course. It’s quick, effective content without the huffiness of legally required health insurance or time off.

None of those squishy human needs.

It’s the kind of thing that Silicon Valley tech bros dream of – and create PR spun like fine silk for.

That’s not hyperbole. “Effective Altruism” is a philosophy supported by tech figures like Sam Bankman-Fried, CEO of defunct and disgraced crypto currency FTX.

If you’re curious how a name sounding so altruistic and shiny could be so misleading (because you haven’t heard the tale of the poor rich man stranded in the Bahamas with a single credit card) and think GPT-anything sounds promising – I implore you to read this.

Gebru explores the human impact beneath a shiny varnish touted as “AI safety”.

In December, we may have begun saying goodbye to all the questionable links that still brought our sites authority and traffic.

SpamBrain is Google’s new AI-based spam-prevention system. It launched as part of the December 2022 link spam update. The update is set to identify unnatural links and neutralize the authority passed by them.

All languages will be affected, and rankings will change as the update slurps up that link juice.

Is this finally the chance to bid farewell to guest posts for hire? Will our LinkedIn inboxes finally be free?

Users may be shifting away from Google, but that doesn’t mean they’re not searching. They’re switching to TikTok.

The viral app’s algorithm is a whole new beast from the optimization Google has got us (mostly) comfortable with.

Unlike Meta and Google, TikTok has publicly committed to showing those interested how it generates results.

TikTok’s transparency policy came about after receiving some criticism around how its algorithm creates echo chambers that promote radicalization and the spread of misinformation.

Lidia Infante’s latest piece for Moz breaks down the social media platform’s documentation on how its algorithm works.

The article covers principles behind the TikTok algorithm and the eight core TikTok ranking factors.

For years, SEOs have tracked ranking changes from the latest Google update. The problem is that the complexity of the ranking system has ballooned.

There are literally updates every day. Plus experiments.

Seriously – we’re four Mobilegadons deep. You’re going to have to be more specific.

In it, you’ll find unifying definitions for ranking systems like BERT, MUM, and reliable information systems. Deprecated systems have their own entries as well.

A partner piece on the Search Central Blog elaborates on the difference between ranking systems and updates to those systems.

One of the key challenges of working in search since Britney Spears had a buzz cut is learning how to decode the 75 ways any single person can refer to the same thing.

Like the new SERP feature with the things and the links – you know the one!

This week, Google announced a new Visual Elements Gallery that displays and defines the 22 visual elements that are most likely to appear on search result pages.

The documentation isn’t ground-breaking, but common language can be unifying. Sometimes that’s the best gift we can hope for.

CFCM is make or break for many businesses, and organic traffic is a crucial means of offsetting the jaw-dropping budget Paid Search is about to burn through.

If someone you care about works in e-commerce, get this piece by Sharon McClintic to them before next Black Friday.

It’s a one-stop shop for all the Black Friday technical SEO tips you need, with learnings from Daniel Cartland and Luke Carthy.

If Google’s Year in Search constantly feels like an admission of all the reasons we should be on the proverbial ‘naughty’ list… then good news! This year you can swap out the sweeping global indictment of humanity’s obsession with Wordle with a Local Year in Search.

If you’re like me, you’re taking that self-righteous vindication all the way to the revelation that the Denver, CO area searched “electronic dance music” more than anywhere else in the U.S.

This year you can refine your existential place in the universe to your city!

Or maybe like Anchorage, Alaska and Des Moines, Iowa you had “quilt shops” in your top trending “near me” searches.

Third-party tools are a cornerstone of digital marketing. We use them to estimate opportunities and research competitors.

We make decisions on that data.

How do you decide to trust them? Their mechanics are heavily obscured and their methodologies are often inscrutable past a marketing tagline.

Rand Fishkin shared a new SparkToro study on the accuracy of traffic estimates by 3rd-Party tools.

The post looks at four three tools with a goal of examining:

The hottest topics in our Slack community

Here’s a look at the hottest topics from our exclusive Slack community during Q4 2022:

Our favorite Slack threads each year are our community’s look back on their wins for the year in our #showoff channel.

We always love to see our members’ wins for the year. Go team!

Friend of TTT Kristin Tynski was back with another offer to use GPT-3 to come up with press-worthy, data-driven content ideas for TTT members’ sites – free of charge.

Several members took Kristin up on the offer, and she and the Fractl team came up with content ideas for a dozen sites in niches as varied as non-surgical cosmetic improvement, gardening, and CBD.

In one of his weekly Slack threads, Blake Denman, a Traffic Think Tank Community Advocate, opened up about ”why I’m slowing the eff down, what I’m working on, and why I’ve adopted acta non verba (actions, not words) as a core life philosophy for myself”.

This vulnerable thread resonated with plenty of members and prompted a in-depth discussion around escaping hustle culture and slowing things down.

4. Kristin’s 20 predictions for content marketing, PR and SEO in the next 5 years

Back in October, Kristin Tynski shared her 20 predictions for content marketing, PR and SEO in the next 5 years and asked the community to let her know where she was right – and where she was wrong.

What followed was a thread that wracked up 18 replies and a word count close to five figures as our community took a deep dive into the impact AI is going to have on our industry in the coming years.

It was awesome to see TTT MVP’s Tory Gray, Jess Joyce, and Jordan Choo organize their own Toronto meet-up 🍻 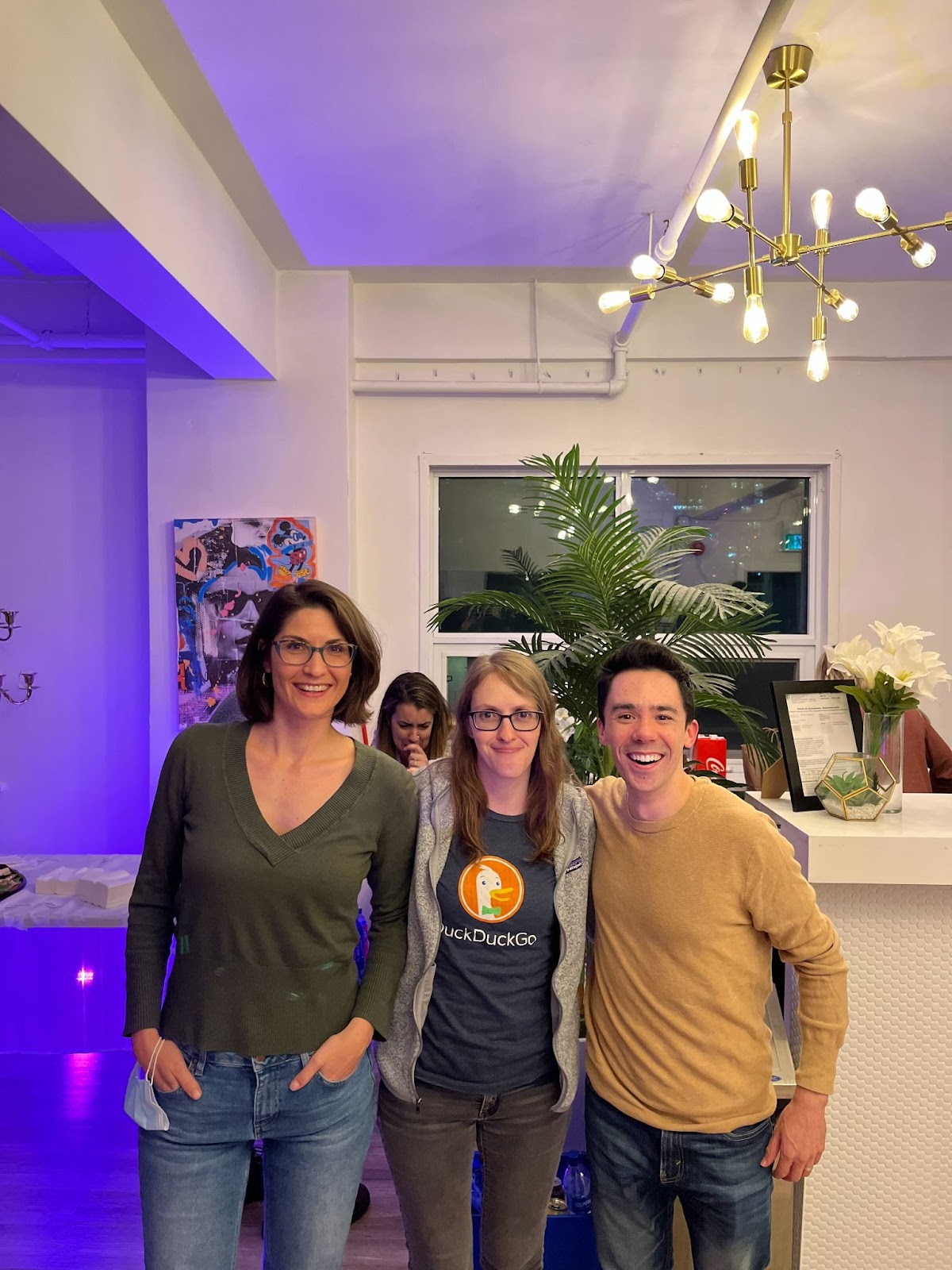 When a TTT member asked the community if they knew of “a tool similar to Pitchbox that drips emails based on non-response from a domain that is a little more affordable”, Aleksandar Ljubinkovic went above and beyond. He asked for a CSV of the email list they planned on using and then recorded a Loom walking through how to force Mailshake drip feed an email sequence and stop if there’s a response.

7. The best project management system for a small team

When a TTT member reached out to the community asking for recommendations for the best project management tool for their four-person team with an ever-growing client list, the community had plenty of thoughts.

ClickUp got the most votes, with most people citing its flexibility, while Basecamp was a close second.

Tory shared her insights into how to measure the SEO customer funnel. This deep dive included the metrics and indicators The Gray Dot Company team look at to:

A TTT member had questions about job listings SEO – and Nick LeRoy had answers. He gave a mini masterclass on Google’s job indexing API and where Schema, XML sitemaps, and robots.txt fit into it all.

“Is this where I yell into the void about GA4?”, asked a TTT member in our #analytics channel.

This snowballed into a discussion around GA4’s pros and cons, whether everything being an event makes things more or less confusing, and the Analytics API quotas.

The latest article takes a deep dive into what the Traffic Think Tank community thinks about GA4 if you’d like a temperature check on how other SEOs are feeling about Google’s shiny new analytics platform.

Want to stay clued up on all things SEO without having to wait until our next quarterly update? Sign up to our weekly Rich Snippets newsletter and join Traffic Think Tank to get real-time updates and join the discussion.

And if you want to catch up on what you missed earlier in the year, catch up on our quarterly highlights from Q3 2022 and Q2 2022.